A nationalistic party in Ukraine issued a press release calling for the boycott of Israeli and kosher goods since “buying them helps the Jews and Israelis conquer and destroy Ukraine’s economy”.

The party’s official website reads, “When you buy kosher products made in Israel you are helping destroy your people.

“Naïve Ukrainians don’t pay attention and buy products under the Z’hids’ ‘kosher’ slogan, which are spreading through the Ukrainian market more and more. Ukrainians buy them without knowing that they are actually helping Israel conquer the Ukranian market and destroy Ukraine’s national economy.”

The party’s website also stated that 13% of the profits from sales of kosher products went to religious Jewish communities in Ukraine and were used against the Ukrainian people.

A detailed explanation of how to identify Israeli products according to the barcode can be found in the website. The party calls on Ukrainians not to purchase any products marked kosher, since they are affiliated with the “Zionists”.

An anti-Semitic caricature of a long-nosed Jewish man counting money while sitting on a pile of skulls with a Star of David in the background can also be found on the website.

It seems that these anti-Semitic cries have not gone unanswered, as a Jewish Agency poll carried out a few months ago showed that 45% of Ukrainians did not want to live among Jews. 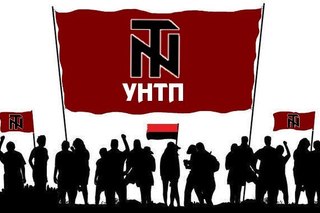